Ever wanted to just get up and walk out of a meeting? 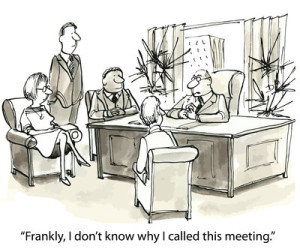 Meetings consume huge amounts of time for most of us, our customers tell us that these are often the least productive elements of their day.

“That was so worthwhile!”

When was the last time you walked out of a meeting and said, “That was a fantastic, productive meeting”? Most of us can count these on one hand. Normally, we experience meetings that:

Chances are that the meeting will end up without decisions being made. Turning into a complete waste of everybody’s time and you walk away with a new ‘date’ for the next meeting!

Outside of work, I help organise dance events and shows. We have one chairperson attempting to structure and run the meeting with everyone else either shouting their views or not expressing anything at all. Most people leave wondering why they even bothered to attend! I’ve found that because we are allowing the loudest perspective to be heard, we are limiting, sometimes quashing, the input and ideas from others. We are finding that attendee numbers are dropping and most meetings do not end with a positive outcome.

We’ve tried several tools like delegating tasks and pre-planning to try and achieve a smooth and successful meeting. However, none of these are foolproof. We needed to be able to add a structure to our meetings that would:

As part of my job, I attended Edward de Bono’s Six Thinking Hats™ workshop. I wondered if we could implement this to be able to maximise the decisions and consensus from our meetings.

The Six Thinking Hats™ technique focuses on solving challenges and problems by thinking about them in an orderly fashion. You investigate the problem and the solution with intentionally different angles, then switch to new angles. Dr Edward de Bono, the founder of this concept, refers to these ‘angles’ as thinking hats – each one tied to a certain way of thinking about a situation.

For example: in our dance meetings the main challenge was that we had a lot of confrontation and disagreements. This led to conflict in the group, making it harder to work with each other on anything. We found that, when individuals didn’t like an idea they wouldn’t spend much time thinking about its benefits, they would only focus on why it wouldn’t work. They would only voice the negatives and not allow the positives to be uncovered – fearing that they would have to accept that they lost the argument.

However, when we applied the Six Thinking Hats™, everyone was asked to give Yellow Hat benefits, regardless of whether they liked the idea or not. Whilst on the other hand joyful supporters of the ideas were in turn asked to give Black Hat restraints to their ideas.

Using just two of the Six Hats enabled each attendee to participate, breaking down their thinking and communication. It completely eradicated abrupt and direct comments like, “That’s rubbish” and “Don’t be so negative!”. The Six Thinking Hats™ method helped us modify our behaviour without attacking it. This simple process not only changed our thinking, but it also opened up new opportunities and improved some of our processes (something I’ve seen mirrored at work). So, we now have productive and enjoyable meetings, and more time to dance and celebrate our successes!

The Six Thinking Hats™ technique is a business tool that can be used in many group interactions you have. We use this at Indigo every day to shorten our meetings and get a lot of decisions made. Just imagine the results you could gain in your workplace.